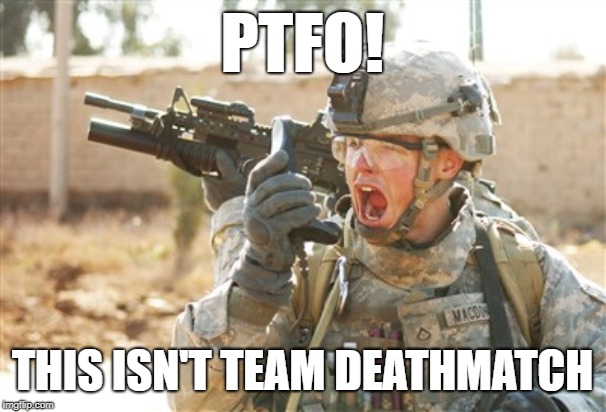 With all of the excitement surrounding Battlefield 2042 we decided to hold a Battlefield 4 Community Night  yesterday.  It was awesome to see that we had over over 20 members of the “Pig Army” in attendance.  This title, one of our community’s all time favorites,  had not been fired up by many of us in some time.  I have to admit I was not sure how this evening would go.  Nobody seemed deterred by the game’s graphics, which even though they show their age are still pretty solid, or not remembering the maps or button layouts  I also thought our opponents would be real BF4 diehards still playing the game and we may have a tough time, but that was not really the case.  Sure there were some real strong players, but we quickly found our squads at the top of the leaderboards.  It was not because of all of our kills, but by doing the little things to help out team win.

In other words, PTFO, or Playing the “F’ing” Objective!

Call outs.  Capping and defending flags.  Dropping health and ammo packs.  Repairing our vehicles to keep them in battle while dropping mines and firing RPGs at incoming armor.  We do not shy away from any gun fight and actually held our own, but it is the objective play that made the difference.  The difference in my game play is due to the assistance I get from my teammates.  I pick their brains on weapon loadouts and watch the routes they take as they traverse the map.  This has definitely helped elevate me to at least an average player…and that’s ok.  It’s about the camaraderie.  The laughs.  Maybe a bit of trash talk with DavetheGreat.  It’s about good times with great people.

We know there are others out there that are “squading” up with randoms and getting super frustrated.  We have all been there….trust me.  This is really one of the main reasons I helped create the Pork Chop Platoon.  To find like-minded, older gamers that did not take themselves or any game too seriously.  We do not play to lose, but a sometimes a well timed “teabag” on an opponent that has owned you for the better part of the round makes a tough loss more palatable.

We know there are others out there just looking for someone that actually uses a mic, does not comment on your mother’s apparent inappropriate behavior, and cares more about having fun vs. irrelevant stats like kill/death ratios.  If you are looking for a great group of older Xbox console (only!) gamers you should enlist today!

See you on the battlefield!