I was right. If you read My Thoughts on Xbox last summer, you would know that I listed Space Otter Charlie as one of my top ten demos I played during that time. I said that it would be a nice little metroidvania, and it is! Space Otter Charlie is pretty much what it sounds like. You play as Charlie, an Otter, that explores space. While playing, you also learn a lot of interesting Otter facts!

The game play is essentially level based 2D metroidvania with light crafting. You explore levels representing different planets, moons, asteroids, and space stations. Early in each level, you find a map of the area, directing you to your objectives, but also encouraging you to explore to find crafting materials, blueprints, and data logs. There are even secret areas not marked on the map!

The controls are simple. A joystick for movement, another for aiming, buttons for jet pack boost, firing your pistol, activating your special ability, switching weapons, and sliding along walls. This creates a very fluid movement set, combined with easy aiming and firing. Many other actions are automatic, like using keys, teleporters, and talking to crew mates.

The combat is fine, it almost feels like a twin stick shooter. There is no melee attack, which makes close range attacks cumbersome, but you can usually see enemies from a distance. All three basic weapons can be upgraded and your fourth weapon is tied to your outfit, adding a small level of load out customization.

The story is pretty straightforward, with your crew of otters looking for a replacement earth to live on. You start off by trying to salvage parts to upgrade your ship for longer range travel, then start tracking down a planet with water. The story is told through conversations with your crew and data logs, all of which are high contrast, easy to read text boxes.

The characters are not the most fleshed out, except for the main character I guess. It’s interesting to talk to them once or twice, but then you really don’t feel invested in them. You do get to bring additional characters on board your ship, which are cool at first, but not really worth revisiting later.

The art style is really good though. Everything has a classic 50s sci-fi feel to it. The colors are bright and contrasting. Enemies are well defined and easy to spot. Even though it’s a 2D game, it doesn’t detract from the overall style. It may even enhance it!

Overall, I really enjoyed the 4 hours or so I played of Space Otter Charlie. I would definitely recommend it to anyone interested in otters, a good sci-fi setting, or a short metroidvania. I really don’t have any complaints other than that the game did crash a few times on me, but it was always right after a save point, so I never really lost progress. I particularly liked the final level and boss, so if you play, try to finish it!

The publisher provided me with an Xbox copy of the game with the expectation for some coverage. I am mostly blind, so some things I have trouble with may not affect your experience with the game. Space Otter Charlie is available now on several platforms. 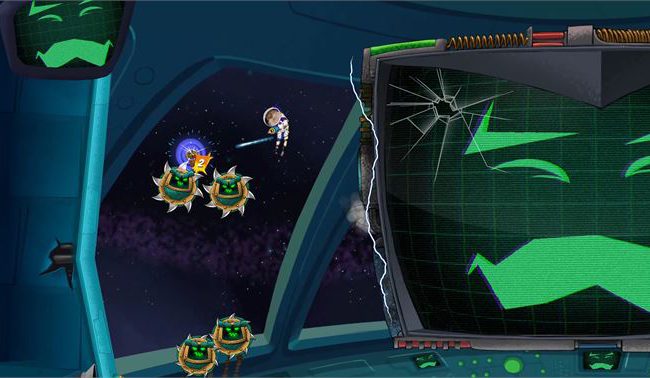 Pork Chop Platoon is an Xbox community for older gamers