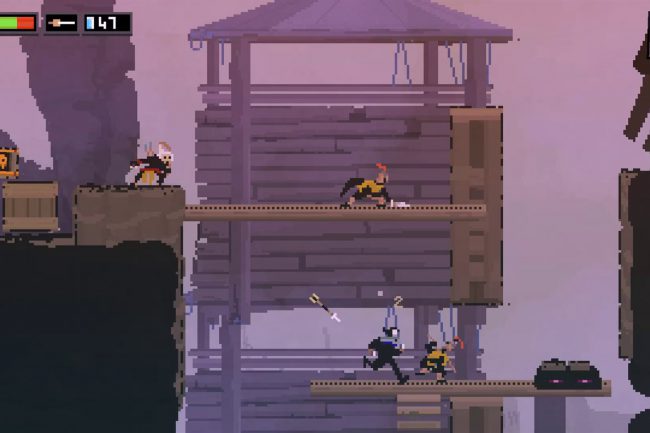 Olija is a game that brings back games of old. It is a platformer at heart, with a little bit of combat, crafting, and RPG mechanics thrown in. This creates something like a metroidvania, with secret rooms but there isn’t a big need to backtrack. On top of the game play feeling nostalgic, the art style is reminiscent of 8 and 16 bit eras as well. Does it successfully bring the past alive in modern times? Keep reading to find out…

We will start with the story. It has one, one that I even found intriguing, but most of it isn’t presented directly to you. There are very few cut scenes, so most of the story is picked up through exploration, dialogue, and filling in the gaps yourself. Your character has a name and a short back story, but you don’t get particularly attached to him otherwise. I do like that the story has some Asian themes, which isn’t seen often in games of any Era.

On to game play! The game only uses a few buttons, making it possible to play with classic controllers. There isn’t much of a tutorial or even a controller map, so you will need to learn most of them on your own. Luckily, it doesn’t take too long. Most of the game has you platforming and doing light combat interspersed with the occasional simple puzzle. At specific points in your adventure, you’ll have boss battles to complete as well. Considering the simple combat and few character upgrades, these prove quite challenging. All of this feels like an older game, without modern upgrades.

The art style is very pixel forward, with a surprising depth of color. Even though it looks antique, the colors do pop. This creates great contrast on the screen, especially in darker areas, making it easy to see what you are doing. I am very grateful for this, as I doubt I could see well enough to play otherwise. The main character sprite is mostly plain and drab, but the focus is put on colorful hats. Unfortunately, you will need to play a bit before you can craft one.

Speaking of crafting, you will need to find collectibles to create those colorful hats. They are an important part of your progression, as they have magical abilities for you to use. Some don’t require anything more than common drops, while others require specific boss items to craft it. A few even require you to pay for an expedition and wait for its return for a chance at receiving the rare items. This system is mostly fine, but once you have crafted a few hats, you will no longer many items that you continue to amass, with no alternative use for them.

Overall, I enjoyed my few hours playing Olija. I enjoyed the mysterious character of the games namesake, pushing me to learn more even though the story itself may be lacking. Though most f the game had a reasonable difficulty, I did have a lot of frustration with a particularly difficult boss encounter. I wish the game had a more gradual difficulty curve, rather than steep increases during boss battles. I would recommend this game to anyone that misses the old school games or would like to play a decent platformer/metroidvania.

I played Olija on an Xbox One S with a code provided to me by the publisher with the expectation for some sort of coverage. I am mostly blind and may have issues with the game that do not affect your experience. The game is available now on a variety of platforms.