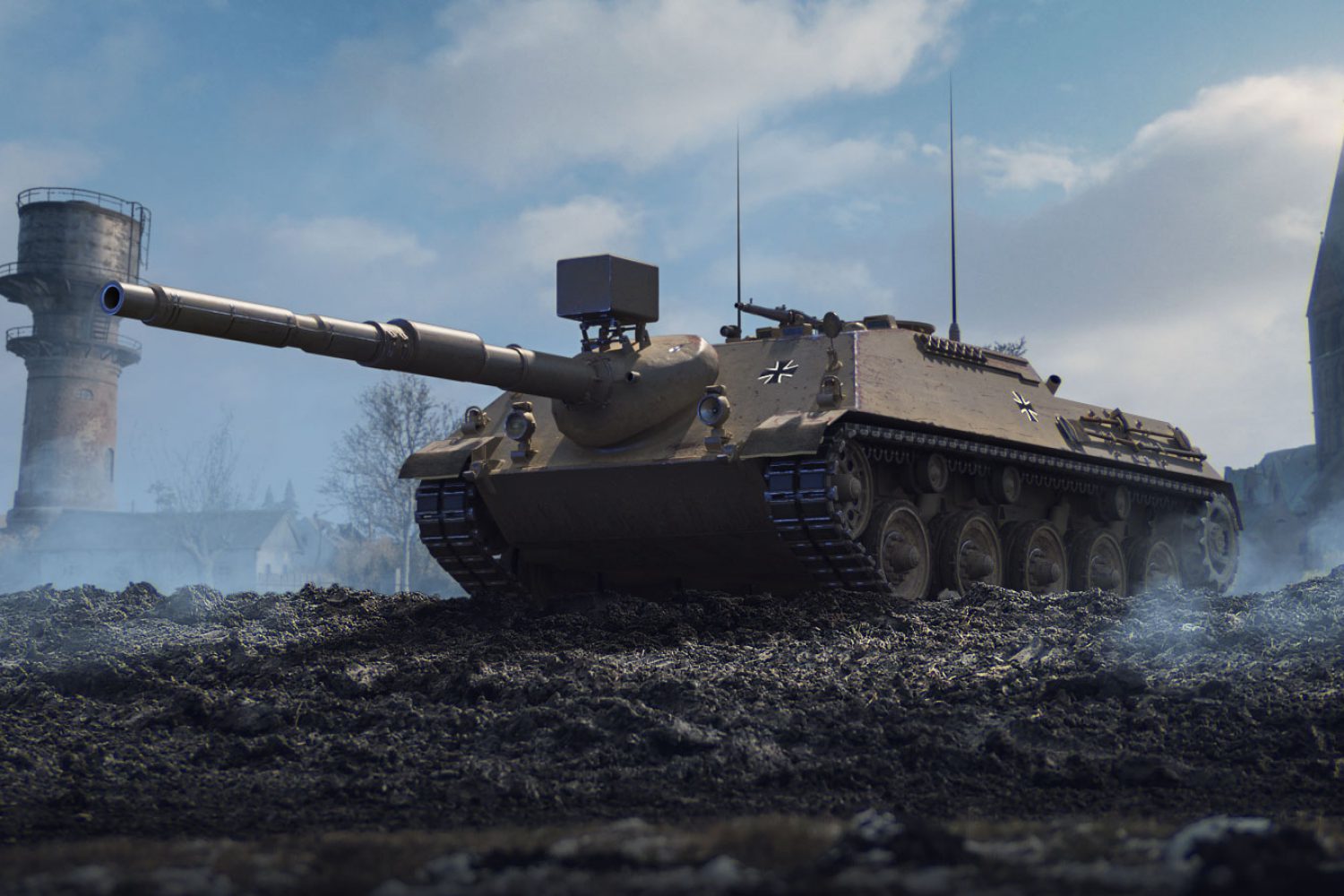 “How did we get here? How in the hell did we end up here again?”

This same question had been rolling around in Sergeant Clay Vaughn’s mind as he stared into the binoculars from the commander’s hatch of his German Bundeswehr Kanonenjagdpanzer 105 tank destroyer, unit number 331.

He already knew the answer, of course. The superpowers were flexing their muscles and trying to be the bigger dick. Whomever was winning the contest, the world was losing.

Back in ’62 Kennedy stood his ground and Khrushchev blinked. The world had barely avoided another war.

President Johnson wasn’t as lucky in 1966. Overextended in the world and committed heavily in Vietnam, the United States wasn’t ready for Soviet Premier Brezhnev to push forces into regions of Europe that were still recovering for the horrors of the Second World War.

Germany, Belgium and Norway were burning again as the Soviet Union tried to expand its “Iron Curtain.”

Even Sweden, which had avoided the Second World War, was not spared the occupation of the Red Army.

Sweden had never had to use its armed forces but had always been preparing. Now it was using its STRV tanks to hold back the tide. Losses were high, but the Swedes knew their land and had designed an army to fight on the home front. Rumors swirled that they were losing, but the Swedes were making the Soviets pay for every kilometer.

Germany hadn’t been at all ready for another war, only 20 short years from the end of Hitler’s insane assault on the world, its people still rebuilding and the country split by the occupation of the former allies.

Being split was something Clay understood. His dad, John, was an American GI in the occupation forces after the war and had fallen in love with Clay’s mother.

There were interesting dinners at his family’s house. John Vaughn was an armor man, rode an M4 as an assistant driver in Patton’s Seventh Army.

Uncle Karl was also in the war, but for him it was the long slow battle back from Russia. A fighting retreat lasted years, but Karl’s crew kept its Jagdpanzer in action until the end.

To say there was tension when Karl came to visit would be an understatement. But when John passed away suddenly Karl was there to support his sister and her son.

Clay was both American and German. He struggled growing up with classmates’ harassment and never felt comfortable as a child of two worlds.

When war came again in 1966 and he had to make his choice, Clay knew he would stay in Germany to protect his family. He was 18 when he enlisted in the Bundeswehr, and he ended up in armor just like his dad and uncle.

Clay started off as a gunner in a surplus American M47 tank before the German government began to reform the military and build armor again. He transferred into Captain Weinbach’s destroyer company two years into the war.

Always a good soldier, he was promoted and given command of the destroyer numbered 331. And so here he was, his country facing the same enemy in the same place it had two decades earlier.

This time it was different. This time the United States, Britain and France were Germany’s allies. The Soviet Union started World War III and the allies would finish it — had to finish it before the war got out of hand and governments became desperate. It had been a hard fought battle to get this far into East Germany, the southern front was now centered around Dresden as the allies cut deep into the Soviet lines. The British and French in the northern part of Germany were pushing hard as the German and Americans moved up from the south. The goal was to encircle and cut off the Soviet armies near Berlin and free all of Germany.

Clay just hoped his country could survive another world war. If it didn’t stop the Soviet advance into Europe then nuclear fire would be the next nightmare the world would face.

“The Americans are engaged north of us. A significant enemy force is making another advance on Dresden. Our company has been ordered to hold this position. We will dig and in the

Americans will try to funnel the Soviet T-55s into our kill zone. Weinbach out.”

“Steffan, you and Tobias jump out and get the camouflage net placed. We are going to be here awhile.”

Steffan Lang was 18 and recently joined the crew of destroyer 331. His family fled Berlin in the war’s first days. They were lucky to be out. In Berlin, no one was left alive.

Combined British and American bombing finished what it started in the ’40s. It was the only way to stop the unrelenting Soviet armored attack from East Germany.

But that was almost the brink, the end of the world. Not only do B-52s and V-bombers carry more bombs than did the planes of World War II, but they would have been loaded with hydrogen bombs as a last resort.

The Soviets were stopped without crossing that final line, dropping the bomb again, but it was close. Still, Berlin was now only a name on a map. It would be a long time before that rubble became a city again.

“Do you really think we will fight tonight, Steffan?” Tobias asked.

“Yes, I think they are coming. With the British and Americans locking down the North they will come out of Czechoslovakia. They think the Bundeswehr is the weak point and will hit us. That is why they have been probing around Dresden for a few weeks.

“I think they are in for a surprise. The good old 331 will make them think twice about coming here.”

“I hope you are right, Tobias. The Sarge knows what to do. Let’s get this net up.”

Radio traffic increased with reports of multiple engagements. The Soviets were pressing hard with tons of armor, but the Americans held air superiority — a very good thing for the allies.

So many years of facing MiG fighters in southeast Asia had made their air tactics razor sharp.

Yet for every American M60 there were more Soviet T-55 and T-64 tanks. If it weren’t for the allied air forces Germany would have been overrun.

German and American commanders were veterans of the Second World War. They knew how to fight. This would be the stopping point.

Clay would do everything in his power to make sure of it.

“Lock it up! Prepare to engage enemy units,” Weinbach said over the radio.

“Load an AP round,” Clay ordered as he closed the commander’s hatch and looked into the infrared sight at his station.

Night fighting was something his father and uncle never did. Now it was a regular part of warfare.

Looking deep into the dark, the infrared sight above the 105mm cannon of the Kanonenjagdpanzer made visible what the human eye couldn’t.

“Round loaded, Sergeant.” Excitement and hint of fear was barely hidden in Tobias’s voice, but the kid was good at his job.

The fighting was getting close, within a couple miles of the 331’s concealed position. The machine was hidden in deep forest cover behind a hastily constructed log wall. Sitting dead in the middle of the destroyer platoon ambush location it was in a good location to cover everything within the gun arc.

The Soviets were being turned as American armor pushed them into the trap.

On the 331’s left was Captain Weinbach in the platoon’s command destroyer. If the plan worked Soviet tanks would drive right into the guns of the waiting German destroyers.

Clay and his crew could feel them through the floor of the destroyer long before they saw them. Tons of metal and flesh moving, firing into the night and burning. They were here; the Americans had done their job.

It was almost time to spring the trap.

“Steady, boys, wait for my command. We will have them right where we want them. They are going to pay for coming here.”

The young crewmen were electrified with excitement and nerves. But beside Clay was a monolith of calm.

Corporal Lukas Schmidt was the most experienced man in the company, mostly from having three tanks shot out from under him already in the war. He was steady in the gunner’s station, his eye locked into the 105’s sight.

Like his sergeant, Schmidt started in old American tanks and found his way into the destroyer company. The two men worked in perfect harmony, Schmidt anticipating the commander’s next move.

Their on-target time was better than any crew in the battalion. In the life or death game of war those seconds mattered.

“Treeline; those two trees with the notches like a W.”

“They are going to come out of that area. It is the direct line from where the Americans are hitting them.”

“Agreed.” Another growl from the gunner.

Clay knew not to expect more from his friend while he was busy.

Suddenly the commander’s night vision sight was washed out with bright light.

The forest in front of 331’s position burst into flame. The Americans had driven the Soviet forces to the waiting Germans — and to their deaths.

Struggling to see through the bloom of light in the night vision display, Clay found his first target, a Soviet T-55 tank just clearing the treeline almost exactly where he predicted.

Now we win this war, Clay realized. This is why we are here.